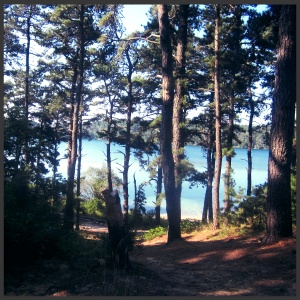 My first night on Cape Cod, I camped at Nickerson State Park. The lake was delightful and not terribly cold, and I went swimming for the first time in a while. The camping was nice enough, I mean, besides the people at the site next to mine who were listening to the strangest mix of music super loudly well past quiet hours. I think I’m turning into an old person, although the campers in question were at least a decade or two older than I. The only REAL problem I had with the campsite is how freakin’ expensive it is.

I will never understand paying nearly $30 for a campsite. Time with nature should be free, or damn close. If there’s a bathroom or a shower structure, then sure, I’ll give you five or ten bucks, but $27?! I know it’s a high-traffic, high-profile tourist area, but I’m sleeping on the ground for God’s sake.

The next morning, I packed up and headed out, determined to do a bit of exploring and find a cheaper place to camp. I tried to go to a local coffee shop in Brewster to explore my camping options, but it turns out they had no WiFi and only took cash. I was 0 for 2.

They said I could go to the library for WiFi, but what they missed was the fact that I did indeed want to eat a delicious breakfast too. I went to Starbucks.

At Starbucks, an about-to-start-his-shift employee sat down near me to charge his phone. He was a friendly fellow and immediately started talking to me about God and gangs and all sorts of probably-TMI sorts of things. A few minutes in, a kid that he knew came into Starbucks and joined us. “This is my friend,” the Starbucks employee said to the newcomer, by way of introduction. “What was your name?”

The newcomer laughed. “Your friend, huh?”

“We’ve been friends for 5 or 10 minutes now,” I joked, before introducing myself formally to the two boys.

I chatted with the boys for a bit and then realized, as locals, they might have more insight into cheap camping on the Cape than either myself or the Googles. My second new friend, immediately suggested a campsite, but when I looked it up, it was just as expensive as the state park. “Well if I were you, I mean, if you don’t steal my canoe, I would canoe out to the island and camp out there for the night.”

Uh, yes. I immediately accosted him with all the questions. What island? Where is the canoe? OMG, I promise I won’t steal it! 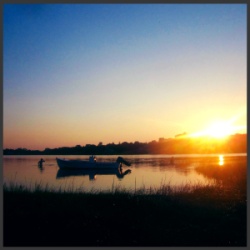 He had a lunch date starting shortly, so we exchanged information and made tentative plans to meet up later.

Later, he decided it’d be easier to row me out there himself. Then he decided to catch quahogs for dinner.

We raided my car for lemon juice (yes, I actually have lemon juice), condiments and my camp stove, bought some cheese and bacon at the Stop and Shop, loaded his paddle board into the canoe so he could get home and not leave me stranded on the island, and then headed out on a truly excellent adventure.

This was one of those days that reminds me why I love traveling so much. The spontaneity. The serendipity. This sunset.

LadyHobo a participant in the Amazon Services LLC Associates Program, an affiliate advertising program designed to provide a means to earn fees by linking to Amazon.com and affiliated sites.